Get to Know Our Board: Meet Randy Haynes0

We want you to get to know Randy Haynes! He’s served faithfully as a board member for many years and will be stepping down at the end of this year as he and his wife are moving to Florida. We are excited for them for this next chapter of their lives, but Randy will certainly be dearly missed by the Compassion Corps family. Check out the interview below and then read his entire bio on our site.

1. How did you first learn about Compassion Corps?

I was teaching at TCA with Beth when her first trip to Morocco occurred. This was the trip that opened the vision for the establishment of Compassion Corps. I remember telling Beth when she came back to TCA that I could see in her eyes that her heart was still in Morocco and that she needed to follow the vision that God was giving her.

2. What made you want to get involved originally?

Compassion Corps’ work with orphans is what caught my mind and heart first. Having been raised in an orphanage, I had and have a link and a bond to those who are growing up in that situation. I also know from experience that our God is able, willing, and longing to lift us above our circumstance to a life of joy, hope, and fulfillment. By being involved in the ministry of Compassion Corps, I am able to have a small part in bringing that hope and that future to the 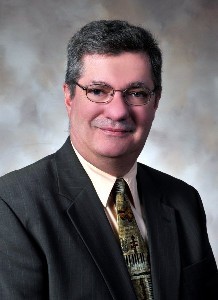 3. What is your role with the organization?

I am a long time prayer warrior and donor and currently serve as chairman of the board of directors.

4. What has been your favorite aspect of/favorite memory during your experience working with Compassion Corps?

My greatest joy has been watching Beth’s transformation as she has gone from a teacher who knew that she was making a difference, but always wondering if there was more she could do, to impacting lives for eternity, to a woman of great vision and faith as she impacts the lives of countless women and children in Africa in ways that she never began to envision a decade ago. I have been privileged to watch the birth, infancy, and toddler stages of Compassion Corps, and am now watching as the grown, but still young, ministry learns to use its God given gifts and talents to fulfill its mission. I almost feel like Luke as he witnessed the birth and growing pains of the first century church and recorded it in the history book we now call The Acts of the Apostles.

5. What is the hardest part about being a Compassion Corps board member?

For many years, I also served as the executive director of another ministry, so time to serve Compassion Corps was limited, and I often find myself frustrated that I cannot be more fully engaged in so many of the intricacies Compassion Corps’ work.

6. Which project/s do you feel particularly strongly about? Why?

I am most keenly aware of the struggles associated with growing up as an orphan, so that is the aspect of Compassion Corps’ ministry that most moves my heart. I recall vividly a little old lady, Mrs. Whittlesey, who chose to “sponsor” me when I was a very young child. That sponsorship involved, I am sure, but do not know to what extent, 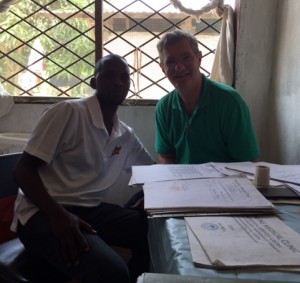 some financial benefits for the orphanage. However, to me, it meant that I got to spend some time with someone who cared about me and wanted to make sure that I was given opportunities to see the world that lay beyond the orphanage. I recall ever so fondly a day when Mrs. Whittlesey took me to the Battery Park Hotel in Asheville, NC. She lived in the hotel, and she wanted me to see her home. I vaguely recall the furnishings, paintings, and stately ambience of her suite, but that which had the greatest impact was getting to ride up and down in the elevator. Seeing my joy and fascination, Mrs. Whittlesey instructed to elevator operator (long before the days of self service push buttons) to take me up and down as long as I wanted and to teach me how to operate the elevator. Little did she realize that she was opening my mind to the fact that I was not eternally bound to the elevator-free world of the orphanage. My life would encounter many “elevators” that would allow me to expand my world and take me to places that I never even imagined could exist. Compassion Corps gives me the opportunity to be “Mrs. Whittlesey” to these precious children, to expand their world, and to bring them hope and a glimpse of what they can be.

7. If you could describe Compassion Corps in one word, what would it be?

8. What is one interesting fact about you?

9. Have you been overseas with Compassion Corps?  To what country(ies)?  What lasting memory do you have?

Yes! I was able to visit Liberia during January of 2016. Here are some reflections from that trip: 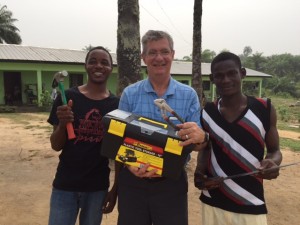 Despite the harshness of life and the constant struggle to survive, the people of Liberia have a deeply rooted joy. They are quick to smile and to offer assistance. They are also so very willing to give of what little they have to make strangers like me feel welcome. It is humbling to see the story of the “widow’s mite” lived out each and every day. It was easy to see that the joy they experience is not related to possessions, but is drawn from the depths of their innermost being. I cannot help but think that the constant reminders of the importance of spiritual life, as noted in the names of businesses and the great number of churches, has given so many of these wonderful people a wellspring of joy despite their incredibly difficult circumstances.

I will long treasure five minutes of video I took from the roof of the Lighthouse Baptist Academy. Below me, a community youth soccer league was holding a match. The goals were comprised of two poles driven into the sand with a string forming the top of the goal. At one point during play, the ball stuck the string and broke it. Play was suspended while the boys figured out a way to repair the damage using the resources at hand. The field had no lines, and one sideline was partway up a hill with a slope of at least 20 degrees. The ball was tattered and under-inflated. I could not help but think about how any one of these issues would most likely cause a match not to be played 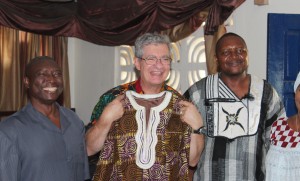 here in the USA. In Liberia, all was taken in stride. Despite all the detriments, the players were spirited and shouted with great joy when a goal was scored. The fans were also enthusiastic and seemed to greatly cherish these few minutes of respite from the difficulties of their daily routines. Again, I was humbled as I observed the difference between joy and happiness.

Another lasting memory is the incredible risk it is to take a ride on the highway. Traffic lanes mean nothing at all, and it seems that the closer you can come to the vehicle beside you, the more respected you are in the eyes of the other drivers!

10. If there is one thing that you could say to others about why or how they might become involved, what would you say?

When you are dead and gone, people will look back on your life and put it into perspective. For me, I do not want them to say,“Randy rose above his humble beginnings and became wealthy, powerful and influential.” No, I want them to say, “Randy cared about people and lived his life to give them hope and to open their eyes to what they could be. He lived to be the hands and feet of God in their life.” Compassion Corps opens doors and removes obstacles for me to accomplish my goals in bringing hope to others. Join Compassion Corps as we bring that hope to the needy of Africa. Make sure that your life makes a difference for eternity!