This is the story of mutual blessing, encouragement and learning. It’s a story about how a shared experience benefited two groups of children in two very different places.

The story begins in West Africa in a suburb of Monrovia, Liberia, where a gracious woman named Martha cares for over 60 needy orphans. Her children’s home, which is supported by a partnership with Compassion Corps, is home to both boys and girls that range in age from infants to teens. While help provided through CC funding has allowed Martha to build onto her facility and offer the children sufficient food and schooling through the years, the group still lives very simply with access only to basic resources and certainly not to any extra comforts or luxuries.

Travel in your mind approximately 4,500 miles west to Wallingford, Pennsylvania, a suburb of Philadelphia. A local 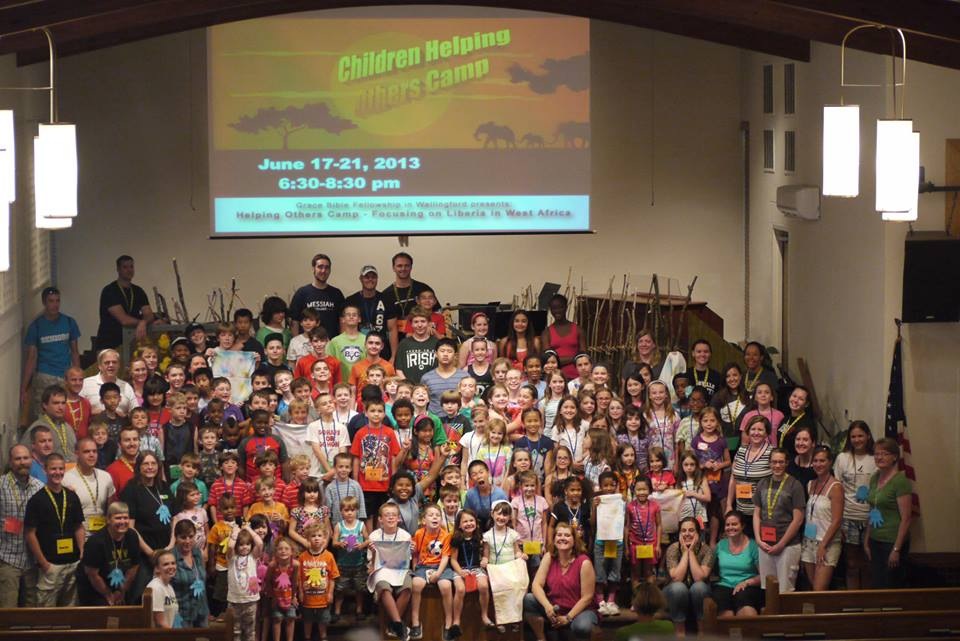 church, Grace Bible Fellowship, decided that this year’s Vacation Bible School theme would be “Children Helping Others Camp” (CHOC). The church hoped that participation in the camp would give local kids an awareness of the needs of children around the world. The goal of the week was to help VBS attendees to begin to look outside of themselves- beyond their own needs and wants- and find practical ways to be a blessing to those in need.

Grace Bible Fellowship has been a great supporter of Compassion Corps’ trips and projects in the past and they took the opportunity again this summer to be a part of what the organization is doing in Africa by focusing their VBS theme around Liberia and specifically around Martha’s orphanage. The church was decorated in African crafts and real photos from Liberia. The kids participated in African games and had the opportunity to taste African food.

While the experience was fun and educational for the many kids who enjoyed their week of VBS at Grace, it was also much more than that. The children were challenged to become active participants in Compassion Corps’ work in Liberia. Through their activities during the week, the kids took a hands on approach to loving, serving and giving to those in need.

Some of their activities included:

1. The kids developed a personal connection to Martha’s kids by viewing pictures of them and hearing stories about them. At the end of the week, each child was even able to take one picture home with them as a reminder to keep that particular Liberian child in prayer.

2. VBS attendees tie dyed pillow cases so each of Martha’s kids could have a new pillow. The Grace kids expressed excitement over the fact that the pillow cases they were preparing would actually be directly delivered to the kids at Martha’s orphanage within a week’s time (the Liberia short-term team was scheduled to leave just days after the VBS concluded)! 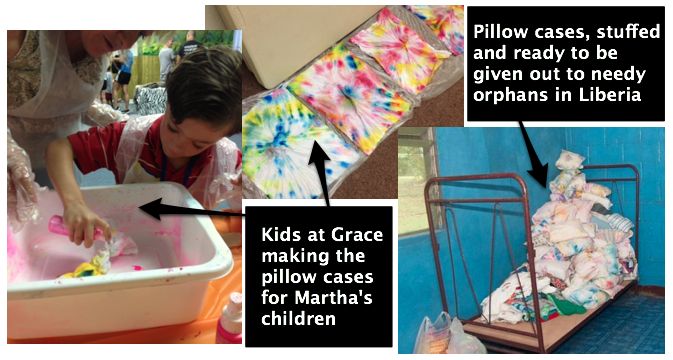 3. The kids raised money to buy chickens and build a chicken coop for Martha so that she and the kids there would have a sustainable income from selling eggs. They raised the money by saying Bible verses and bringing friends to VBS with them!

4. The kids also colored fabric squares, which were taken over to Martha’s and tied together to make a wall hanging quilt 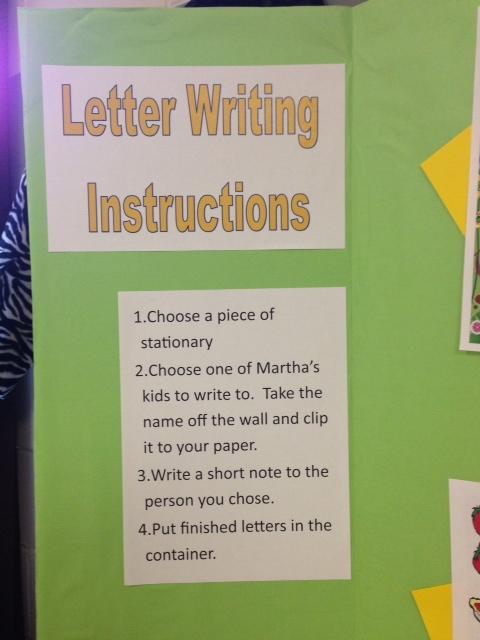 to be used as decoration in their new location.

Now, flash forward one week to where the story continues in Liberia. When the Compassion Corps team arrived at Martha’s in early July, they came bearing gifts, thanks in part to the hard work and thoughtfulness of the kids at Grace. The team had hand-stuffed dozens of pillows and put them into the new, tie dyed cases. There were 62 pillows to give away and there were 62 children, who were thrilled to receive them! The kids danced and sang with excitement as they got their brand new pillows (the kids had not previously had any pillows – let alone tie dyed ones!) and the individual letters from their American friends at Grace.

But the story doesn’t end there. Martha’s children were so blessed by the outpouring of love from the kids at Grace that they decided to keep the connection going by writing letters back. Those letters were brought back by the short-term team along with many pictures of Martha’s kids and their new facility. Later in the summer, Grace hosted a “VBS reunion,” 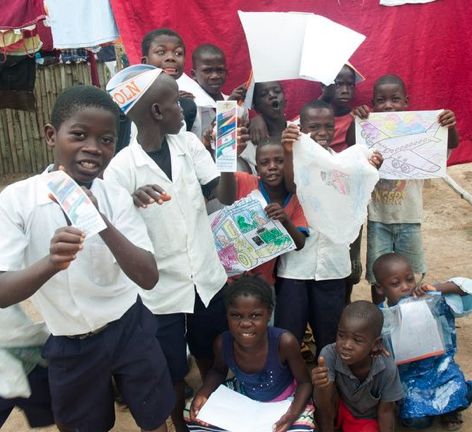 during which the local kids who originally participated could return to the church to hear about the results of their efforts and enjoy the letters from their new Liberian friends.

Children teach us about unconditional love and sacrifice.  They remind us as adults how truly blessed we are and how easy it really can be to make a difference in the lives of others.  If you work with children and would like to get them involved in some of these same ways, please contact us at [email protected]