On the Ebola Crisis: News Straight from Compassion Corps’ Partners0

First, a heartfelt thank you to those who responded to our plea last week for prayer & financial help for Compassion Corps’ Liberian partners who are fearfully watching the spread of Ebola throughout their country. We have heard from several of them through personal calls and emails…THEY STILL NEED MUCH MORE HELP!

The Update – Straight from Our Partners: 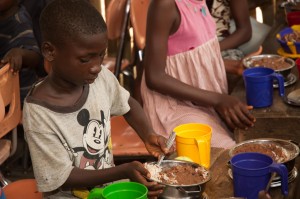 A child at Martha’s enjoys a simple lunch.

Martha called to tell us that she and her 69 orphan children are OK, but Pastor John wrote to tell us that he visited them this past week, and they appear to be feeling the effects of food shortages…the children are hungry. Thankfully, none are sick, but please pray that we can help to get a steady supply of food to them in the midst of challenges such as quarantined areas, military road blocks, rapidly rising food prices, and closed markets.

Pastor Arthur wrote to tell us that his teams had completed visits to 6 villages in remote areas with 6 teams to raise awareness of Ebola, to offer prevention demonstrations, and to offer hope in the Lord. He said that “scores of individuals believed and accepted the Lord as savior.” This past weekend, their work continued in 6 more villages, and he asked for continued, fervent prayer and support to fight the deadly virus and for more opportunities to educate the rural people, many of whom do not understand what they hear from their government on the radio.  Meanwhile, more and more people in Nimba County continued to die from the disease, and Ebola struck his own hometown of Ganta, which “has put the city into confusion.” Fourteen new cases were reported, with one family losing 3 of its members, including a pregnant daughter. 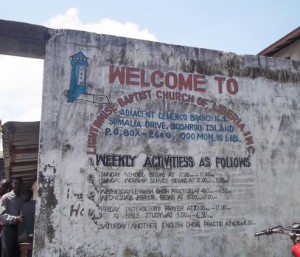 This sign on the wall welcomes visitors to Lighthouse Baptist Church.

Joseph Morris, who is serving on the Liberian government’s special task force against Ebola wrote that despite their efforts, very little headway has been made due to the magnitude of the emergency: “There are families that lost three, four or five members in a space of days and they will call the Ebola emergency number for days with no response. People are now resulting to calling radio stations instead of the response team to air their frustrations.” Joseph also mentioned the difficulties people are facing with regard to food:  “Most businesses are opening only temporarily. Some do not open at all. My wife runs a Mini Mart store on the Somalia Drive and we can hardly open and if we did, it is only for few hours. Prices of basic commodities have almost double in spite of government regulations on prices.” Joseph’s and Pastor John’s church, Lighthouse Baptist, has been collecting donations of food and preventative supplies to be shared with people in their community and in a poorer neighborhood in Bassa Town.

And finally, we received an impassioned plea from a school authority responsible for 125 schools in River Cess County, Daniel Bestman, who has heard about our work in Liberia and who is begging us to help the starving children in his remote region. He wrote that he had to dismiss 16 school principals who were diverting food that was being supplied by the World Food Program to schools that was to have helped ensure their nutrition and to keep them in school. He said that Ebola has just now reached their area, due to an infected woman who traveled to Lofa to bury a relative but who then became ill, carrying the disease back to her husband who has since died along with her. Others who traveled with her in a public vehicle have also died. 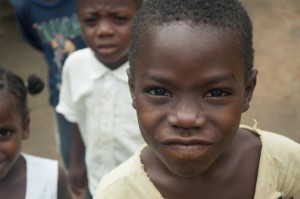 Thank you for anything you can give to help!

Such news continues to be sorrowful and bleak, but please let’s keep lifting Liberia up in prayer for the Lord to deliver them from the spread and effects of this disease and that many more will find hope in Him.  Let’s also do all we can to help. Please donate online, designating your gift on the Where Most Needed tab to the “Ebola Crisis” or send a check made out to “Compassion Corps”, PO Box 103, Chester Heights, PA  19017. Thank you on behalf of all of our courageous Liberian friends.