The Crisis in Egypt: An Update0

As one of our partner countries, Egypt has been particularly on the hearts and minds of Compassion Corps over the past few months. If you haven’t been following the news updates on what is happening politically in Egypt, here is a brief overview:

A Timeline of Major Events

— On February 11, 2011, in the midst of the Arab Spring [for more background, see: http://www.persecution.org/?s=arab+spring&x=39&y=7], national demonstrations in Egypt resulted in the end of President Hosni Mubarak’s 30-year rule. Hundreds were killed by Mubarak and his allies as they tried to stop protesters. Mubarak stepped down after 18 days of massive demonstrations.

— In the fall of 2012, new protests arose as the imbalance of voice became increasingly obvious. Morsi declared self-appointed powers, including a declaration that his decisions would be immune from judicial review. Liberal party members and representatives from Egypt’s churches withdrew from the constitutional writing assembly in order to protest the further imposition of power by ultraconservatives.

— December 2012: The Egyptian constitution was approved in a two-round referendum. However, more than 100,000 discontented protesters marched on the presidential palace and demanded that a new constitution be written. Protests continued through the new year, especially around the 2-year anniversary of the revolts that began Mubarak’s overthrow. Many were killed across the nation.

— On April 7, 2013, the main cathedral of the Coptic Orthodox Church (the primary Christian denomination in Egypt) was attacked by a Muslim mob. The attack took place during a funeral for four Christians who were killed as the result of sectarian violence. The Coptic Pope openly blamed the government for not preventing such an attack.

— On the anniversary of Morsi taking office, millions protested yet again. There were many volatile demonstrations and though Morsi vowed to stay in office, the Egyptian military was forced to take action. In July, the military replaced Morsi with an interim president. Throughout the month, clashes between pro-Morsi and anti-Morsi groups resulted in several tragic events that killed many. Violent demonstrations left at least 36 killed on July 5th, more than 50 dead on July 8th, and another 80 people killed in Cairo on July 27th.

— In August, though international intervention attempts were made to bring stability, the clashes escalated further, resulting in nearly 1,000 deaths during various uprisings. A state of emergency was issued by the interim government on August 14th after Muslim Brotherhood supporter encampments were raided in Cairo.

— As of September 4th, Egypt’s interim government is continuing to support the military coup and officially states that security is its first priority. The government is considering disbanding the Muslim Brotherhood, and several of the group’s leaders and hundreds of its members have been detained.

— Looking to the future: A committee is being formed to review the current constitution; after an updated version is passed (with a referendum within two months), presidential and parliamentary elections can take place once again. 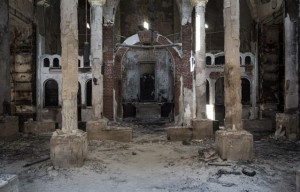 The recent events in Egypt are undoubtedly marked by an underlying religious unrest. In fact, the Muslim Brotherhood blames Christians (who make up approximately ten percent of Egypt’s 80 million) for the ousting of Morsi. Since his removal in the beginning of July, violent attacks on Christian churches have occurred with regularity. Sixty-one churches have been attacked and 37 churches have been fully destroyed and burned. Christians in Egypt have also been attacked and homes, offices, and shops have been burned. Though the interim government has agreed to help rebuild the churches, continued terrorist attacks are anticipated on key Christian figures and locations.

Musselman, a spokesman with the Voice of the Martyrs organization, explained the situation’s severity: “We’ve seen dozens of churches destroyed, Christian businesses destroyed, homes destroyed–a lot of intimidation. There’s a lot of fear right now because even the military and police say they can’t adequately protect them.”

It is amidst this increasingly complex environment that Compassion Corps is privileged to partner with the Arab World Evangelical Ministers’ Association, or AWEMA. AWEMA is a seasoned and influential agency that is involved in work throughout North Africa and the Middle East. Their mission is “to equip and encourage the indigenous believers in Arab countries to have a united and effective Christian presence through outreach, educational, and edifying ministries.” Among AWEMA’s many interventions, its outreach includes women’s ministries that equip and encourage women to have active roles

in their families, churches, and societies and media ministries that equip the next generation to express the challenges and struggles of their countries by expressing compassion to their communities in creative and artistic ways.

Compassion Corps is proud to work with AWEMA particularly because they capture the challenge of cherishing ancient culture while enabling progressive development through the training and equipping of capable, moral, and trustworthy leadership. One of the major ways Compassion Corps desires to partner with AWEMA is to provide scholarships for isolated women in North Africa so they may attend retreats and training conferences. Their programs allow women to gain leadership skills that not only benefit them directly, but offer a sustainable impact to their families and communities.

A Chance to Show Support

Will you join us in keeping our friends in Egypt in your thoughts and prayers?

Our Egyptian partners will be in our thoughts and prayers as their good work perseveres despite violence, and as they continue in the hope of peace.

While AWEMA continues to bravely operate in Egypt during its unrest, Compassion Corps also requests your support for them through designated financial gifts.

Financial resources are vital as AWEMA strives to share their ministry of compassion for the Arab world in the midst of increasing hardship. It is our deep privilege to stand with our AWEMA partners and to thus undergird many who are doing productive work in Egypt, North Africa, & the Middle East. Your generous contributions to this partnership effort are truly needed and will yield significant impact. On Compassion Corps’ website’s “Donate Now” page, designate gifts under “Where Most Needed” to the “Crisis in Egypt” tab, and your help will go directly to sustain the vital work of AWEMA.