Sitting right on the equator, straddling the Great Rift Valley in one of the most volatile regions of the world, Uganda seems destined for the extreme. Although small in size (equivalent to the size of the state of Oregon) the country’s landscape is exceptionally varied and beautiful, with semi-desert in the NE, expansive Lake Victoria in the SE, swamplands & the mysterious trek of the White Nile through the heartland, lush tropical canopy in the West, and some of Africa’s highest mountains encircling the country. Her stunning geography, abundant wildlife (including the famed “gorillas in the mist”) and near-perfect climate that averages about 75 degrees year-round make Uganda a popular tourist destination. 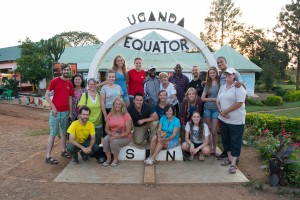 Tourism coupled with profits from rich soil and resources (including significant oil reserves) might have served to make Uganda a prosperous nation. But over the past 50 years the country has been the staging ground for some of Africa’s most notorious corruption, unspeakable crimes against women and children, and unceasing violence which left the country’s economy in ruins. In the 70′s, during the reign of terror of Idi Amin, it is estimated that 300,000 Ugandans were tortured and killed, and as recently as this past decade, thousands of children have been kidnapped and made to serve in the “Lord’s Resistance Army.” Almost 2 million people were displaced during the past few decades, many still languishing in refugee camps. Malnutrition and disease – including the scourge of HIV/AIDS – grew to be rampant. International intervention and peace talks a few years ago have encouraged many Ugandans to return to their homes and help to rebuild and to heal their nation. While peace prevails, the Ugandan people are making a courageous effort, but they are calling upon the world for help.

Compassion Corps’ primary partnership in Uganda involves helping a school and its community in the Kilembe Mines/Kasese region in the West of Uganda. Students here are supported through Compassion Corps’ Student Sponsorship program. We have also assisted in the development and resourcing of a coffee cooperative to help coffee farmers in this remote, mountainous area, so that they might earn fair prices for their coffee by marketing it through our Cup of Compassion program. By helping our partners there to create a sustainable development project, their school and programs will be able to not just survive but to expand their impact and make a real contribution to their community.

We have also been excited to undertake a challenging community development project in a region just north of Lira, Uganda: partnering with the parishioners of St. Barnaba’s Church in Agwata, Compassion Corps is consructing a Health Clinic that will benefit thousands of rural people who have had no ready access to medical care.

We hope that our efforts will serve to build and to strengthen lasting partnerships that will encourage the hands that are weary, but determined to make their beloved Uganda the paradise that it once was.

…stay tuned for exact dates to be announced soon!